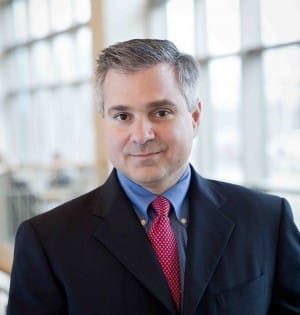 Dr. Doug Tomasian is a native of Boston, Massachusetts. He has been with Illinois Cardiovascular Specialists since May of 2020. Prior to joining Illinois Cardiovascular Specialists, he treated patients mostly recently at Centegra Physician Care and Cardiothoracic & Vascular Surgical Associates and was director of cardiology at Centegra Hospital McHenry from 2011-2018.

Dr. Tomasian graduated from Bates College with a Bachelor of Science in Biology in 1989. He earned his medical degree from Jefferson Medical College of Thomas Jefferson University in Philadelphia in 1995 and completed his residency in Internal Medicine at Northwestern Memorial Hospital in 1998 and served as chief medical resident at Northwestern from 1998-1999. In 2003 he completed his training at Boston Medical Center where he was an Interventional Cardiology/Peripheral Vascular Fellow from 2002 – 2003 and a cardiovascular and interventional cardiology Fellow from 1999 – 2002.

Dr. Tomasian and his wife, Agnes have three children. He enjoys spending time with his family outside work and playing tennis, skiing when he gets a chance and enjoying sports with his children.